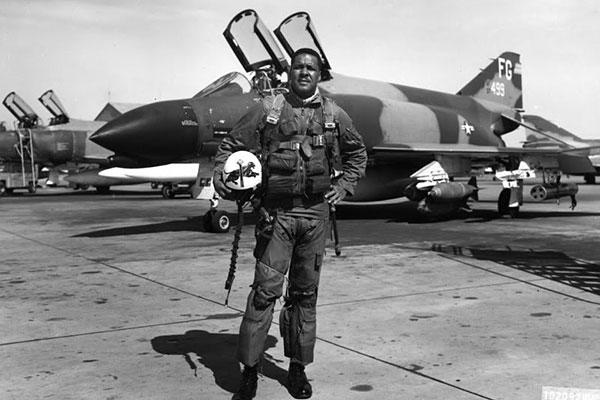 There’s been something big happening in Pensacola the past year or so. In case you haven't noticed, there’s a new bridge  spanning the way from Gulf Breeze to Pensacola. The old Three Mile Bridge is a thing of the past. Instead, there’s a new, shining white arch signaling the way into the city now.

The first span of the new bridge opened to north and southbound traffic Sept. 8 in preparation for the old Three Mile Bridge to be demolished for a second span. While it remains nameless, that won’t be true for much longer. The Pensacola Bay Bridge Committee, consisting of officials from Escambia County, Santa Rosa County, the City of Pensacola and the City of Gulf Breeze, voted unanimously July 9 to name the bridge after U.S. Air Force General Daniel “Chappie” James Jr. With the committee’s approval, Florida State Senator Doug Broxson has submitted a proposal to name the bridge after James. The Florida legislature will vote on the name in January.

James was a Pensacola native born in 1920. In 1943, he became an officer in the U.S. Air Corps and went on to become one of the Tuskegee Airmen, who were the first African American pilots of the Air Corps. In 1975, he was pinned on as the first African-American Air Force four-star general. After serving for 35 years in the military, he retired in 1978 and died approximately three weeks later. For his position and his dedication to the United States, hewas buried in Arlington National Cemetery with full military honors.

The name for the bridge had been in contention for months prior to the committee’s vote in July. The more commonly known Three Mile Bridge was officially named after Philip D. Beall, a 1934 Florida State Senator representing District 2. In 1943, he was voted president of the Senate and died of a heart attack while in office. For his work transitioning the first Pensacola Bay bridge from private to public ownership, the then-new bridge was named after him in 1962.

The committee’s vote for James was based on community suggestions. More than 1,000 emails were received by the committee, though about 260 were thrown out as duplicates. Of the 804 emails left, 359 were in favor of naming the bridge after James. The closest contender was Beall, who had 65 votes, and third place belonged to the colloquial name Three Mile Bridge at 57 votes.

James’ name was first brought up by retired Marine Cris Dosev, who went on to become chairman of the Chappie James  Memorial Bridge Foundation. The foundation supported the naming of the bridge in James’ honor and drew up plans to build a memorial park at the end of the bridge. The park would include a statue of James as well as display of the fighter jet that James flew in the Vietnam War, an F-4 Phantom II. With the name chosen, plans are moving forward in the foundation to raise money for the park with hopes of having it completed by the time the second span is opened to the public.

Dosev said that honoring James in this way continues not only an American legacy, but a Pensacola one.

“Not all towns have the heritage we have, the military heritage,” he said. “We claim to be one of the firsts, the first settlement, and here we have the first African-American four-star general.”

The naming of the bridge is not the first instance of Pensacola continuing James’ legacy. The James’ old family home on Martin Luther King Drive was converted into a museum and a building behind the house was opened in 2018 as a flight academy. The academy teaches the basic mechanics and science of flying to mostly underprivileged children. Classes had run for years as an annual camp before the academy building was opened, currently with sessions ongoing throughout the year.

The museum and academy continue a different legacy than James’, that of his mother Lillie James, who ran a school for the neighborhood children from that house. James attributed a lot of his passion and characteristics to his mother, who was a strong figure in the community. She had 17 children, with only seven reaching maturity. Chappie was her youngest son.

With the current span open to traffic and construction starting on the second span once the old Three Mile Bridge is taken apart, the Chappie James Memorial Bridge Foundation is eager to celebrate James’ centennial birthday with the official name expected to be announced in January. James, born Feb. 11, 1920, would be turning 100 next year. Dosev said it is a neat idea to consider that the bridge will be named for James on his 100th birthday and that this bridge could last another 100 years. “In the big scheme of things, it’s the quintessential American story,” Dosev said. “But, unlike a lot of people’s successes that we recognize for material goods or wealth, this one was dedicated to the defense of a country that, when he was a young man, would deny him a place even at a counter at a diner. That’s a big deal.”

The new bridge is set to be completed in summer 2021. The current span will serve as the southbound lane with the second span serving as the northbound lane. It will have dedicated walking paths for pedestrians and LED light railings to better illuminate the roads and walkways. The name of the bridge is unofficial until the Florida legislature votes on it, however there is no current opposing legislation against the name.

Many people say they will stick to calling the bridge Three Mile Bridge, however the community gave their voice to this process. An overwhelming number of those voices called for James to have his name marked on the largest landmark in Pensacola. No matter what people may call it on the street, the community’s pride in James and his accomplishments led to the decision to continue his name and his legacy as one of Pensacola’s greatest.