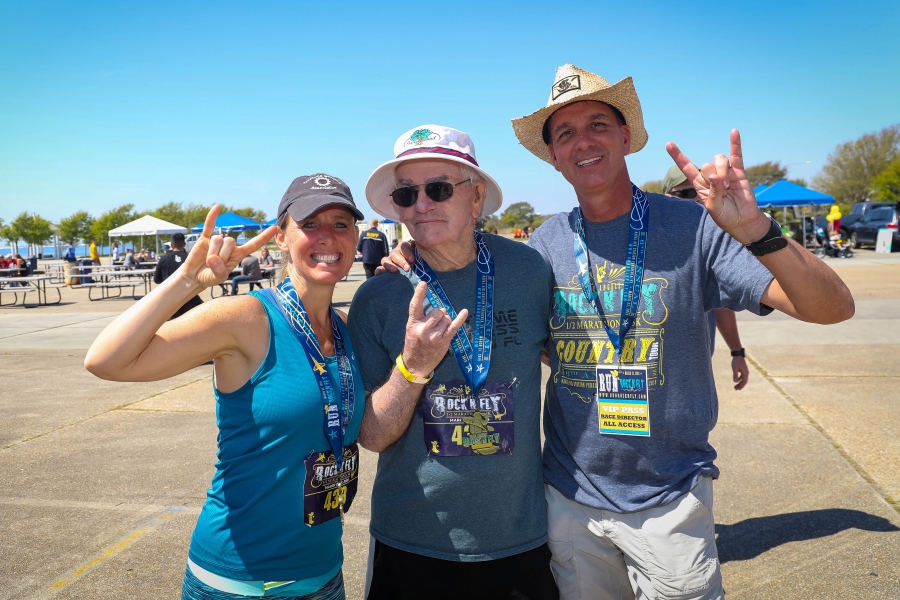 George Goggans smoked until he was 50. At 83, he just ran a half-marathon.

For more than 30 years – ever since he managed to quit smoking on his 50th birthday – Goggans has approached his health with the practicality of a prizefighter. He’ll do whatever it takes to get the most out of his time on earth. He may not love the work, but he cherishes the results.

“I tell people I don’t enjoy it, but when I get through I’m always glad I did it,” Goggans said, a former English teacher. “I feel like I’ve made a contribution to my health.”

Despite his age and an arthritic spine, Goggans says he’s in the best shape of his life. He rises early to run around Azalea Trace and the University of West Florida campus. In addition to his running regimen, Goggans regularly attends aerobics and yoga classes led by Azalea Trace fitness trainer Maryjo Loucks. He was feeling so good in January that he approached Loucks with a question: Did she think he could run a half-marathon?

“The most distance I had done before then was 5K,” Goggans said. “I wanted to see if I could do it. She said, ‘Let’s give it a

Loucks started Goggans on a training regimen and the pair set their sites on the Blue Angels Rock 'N Fly Half Marathon onboard Naval Air Station Pensacola on March 23.

Goggans checked with his doctors and a rheumatologist who all gave him the “OK” and began bumping up the length of his runs each day. He also had the support of his wife Emma Whitfield.

“First of all when he told me he wanted to run a half-marathon I wasn’t really that surprised because fitness is extremely important to both of us,” said Whitfield. “I did think, ‘Well, you know, you are 83 so my main concern was I wanted to get the doctors’ OK.’ Once they said it would be OK I was completely supportive of it because I know when he decides to do something he wants to do it, but I also know he’s not going to do anything out there willy-nilly.”

When race day came, the longest Goggans had ever run was 10 miles. A half-marathon is 13.1 miles. Then, just weeks before the race, he came down with a fever and had to put his training on hold.

The night before the race, Goggans barely slept.

When race day came, the furthest distance Goggans had ever run was 10 miles. Undeterred, he took to the starting line intent on crossing the finish line. Loucks, an avid runner herself, ran alongside Goggans and snapped his picture at every mile marker to send to Whitfield as she waited at the finish line.

“I was just going to sit in a lawn chair and read my book and I absolutely could not,” Whitfield said. “I stood by the road the entire time. I was nervous, not because I thought he was going to have a heart attack but he didn’t get to finish his training.”

Goggans started strong, but around the tenth mile his back pain flared up and he had to slow to a walk. Whitfield, meanwhile, approached the race announcers to confirm that her husband was the oldest runner by more than a decade. She began relaying Loucks’ updates to the announcers who in turn shared George’s progress with the crowd.

“Pretty soon the spectators started paying attention and listening for updates about Goggans,” Whitfield said. “So when I saw them come around that corner everybody started yelling, ‘George! George! George!'”

Goggans had persevered. Despite the pain, he was determined to run across the finish line, and so he did with the crowd cheering him on. He finished the race with a time of three hours and 21 minutes.

“It gave me a real sense of accomplishment,” he said. “I was really happy I had done it and survived it without any major problems.”

As for future plans, Goggans said he probably won’t attempt another half-marathon. Once was enough to prove to himself he could do it. No sense in risking injury. He’ll stick to his regular routine, golf twice a week and hiking in Colorado when he gets the chance.

For a man that used to smoke a pack a day, Goggans sees himself now as the steward of a second, healthier life.

“I consider life as a gift and my taking care of it as kind of a thank you note,” he said.