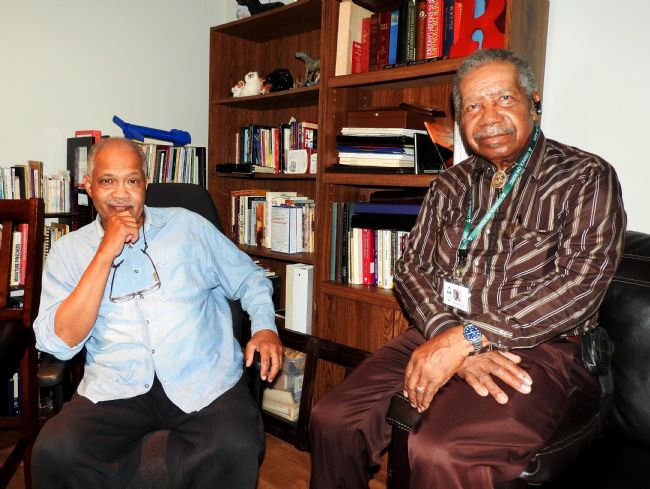 Ross Knight and his Senior Companion, David Alexander Jr., both project a kind of peaceful wisdom, an aura that comes from their own individual nature, but also from their compatibility as a pair. Native to Pensacola, Mr. Knight returned to Pensacola with his family and started a non-denominational church. He and his wife had seven children, all of whom have college experience, and his later years Mr. Knight had his own ranch and petting zoo. Reflecting on his varied professions and involvement throughout his life, Mr. Knight emphasizes that he likes %u201Cto be active. Sometimes things move a little too slow around here for me. I have always been active my whole life and like to be around energetic people.%u201D

His Senior Companion, Mr. Alexander, feels the same. A pastor and counselor by trade, he is affectionately referred to by Mr. Knight as %u201CBishop Alexander.%u201D Though he is approaching his 80th year, he says staying active is important to him because he loves %u201Chelping people unable to help themselves. There is something down in me.%u201D Mr. Alexander speaks with pride of his college educated children, his Ph.D., and his love of mentoring young people.

It is clear that these two men, both spiritually motivated and with a strong desire to effect change, are kindred spirts. Says Mr. Knight, %u201Cwe have known each other for years in the community. At first I wasn%u2019t sure, because he is older than me, but now I couldn%u2019t imagine it without him%u2026he helps me tremendously, and is such a fine gentlemen, active, independent%u2026%u201D Mr. Alexander sits, humble in light of this praise, but beaming. He chimes in, %u201CI%u2019ve enjoyed [being a Senior Companion]. I like to meet and help people. It%u2019s been very good.%u201D

Mr. Alexander continues, referring to the Senior Companion program as, %u201Ca beautiful program. I%u2019m very proud.%u201D Mr. Knight nods his head in agreement. %u201CWhen you age, you can%u2019t do things like you used to, though you want to. Thank God has preserved me up to now.%u201D

Mr. Knight concludes, sweetly, with the sentiment, %u201CBishop Alexander was gone last week, and I missed him! I couldn%u2019t hardly wait until he came back.%u201D