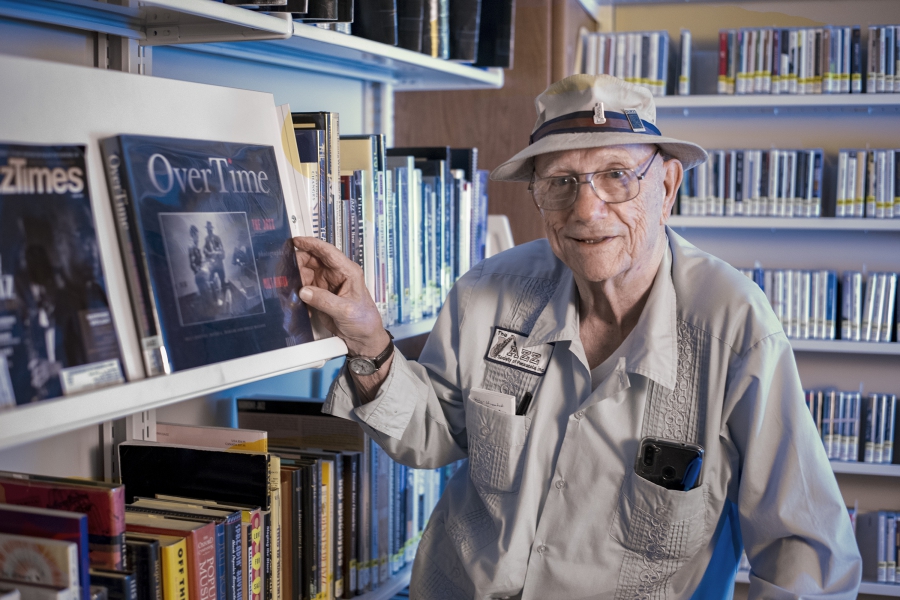 In April, Dr. F. Norman Vickers was named a 2021 Jazz Hero by the Jazz Journalists Association. Vickers, a  Mississippi native, arrived in Pensacola in 1965 to begin practice of gastroenterology, a subspecialty of internal medicine with specific focus of digestive diseases. He combined his interest in music with his medical practice and was instrumental—the pun is intentional—in forming the Jazz Society of Pensacola in the early 1980s and starting the Pensacola Jazzfest. He was even a charter member of the American Federation of Jazz Societies and served in various positions including president in 1991.

Now, at age 90, and retired from medical practice for almost 20 years, he continues his interest in jazz by writing for the Jazz Pensacola newsletter and reviewing books and CDs for the Syncopated Times, a monthly jazz publication.

When Norman Vickers was five years old, his world changed. Vickers’ father, who was a wholesale vegetable plant seller specializing in tomatoes and cabbage, had a grand opening ceremony for the commissary he had just built. For the grand opening, he hired a local group of musicians to perform. It was country music, but Vickers recalls a lesson he learned that day.

“Seeing that and seeing how that pulled people together and the atmosphere was friendly taught me that music does something for people,” he said.

Vickers recalls that he and his family listened to the WWL clear channel station from New  rleans, LA. The station had an early morning program with music and talk, so he would listen to that and the New Orleans style music, which grew in him a bigger interest in music. Vickers began music lessons at the age of six. When he was seven, he and his family moved into town, where there was a community wide boys’ choir at church, so he joined the choir in order to continue his musical education. Vickers recalls that he was given a harmonica, to which he laughingly remembers: “every kid had a harmonica” during that time. But the harmonica didn’t make sense to him because no octave was the same, and only the middle octave only featured the diatonic do re mi fa so la ti scale, with no sharps or flats. At the age of 10, that confusion resolved when someone gave Vickers a chromatic harmonica. The chromatic harmonica changes between two scales when you press a button, so to Vickers it was like a piano with white and black keys on it. The chromatic harmonica made sense to him because it reminded him of the keys and scales on a piano, so it turned out to be easier for him to play. Since then, Vickers and the chromatic harmonica have gone through life together—so much so that he keeps one belted to his side for easy access.

This idea of music resonating within people and bringing them together to create a feeling of peace and unity followed Vickers into his career as a gastroenterologist.

“My career is an internal medicine specialty with a little bit of a surgical flavor,” he explained.

Vickers’ endoscopy patients (gastroscopy and colonoscopy) would receive light sedation and as they waited for it to set in he would tell them that he played the harmonica.

Frequently his patients would name a tune that Vickers knew; he would play it for them, and they would hum along. When their words would get slurry, he knew that was his “go” sign. Occasionally, staff would ask him to play for them as he went up and down the elevator, which set Norman apart from the other doctors with whom staff seldom interacted in this lighthearted way.

As the years went on and Vickers became more involved in the American Federation of Jazz Societies, he became acquainted with William “Bill” Gottlieb, a famous photographer who worked for the Washington Post from the mid 30s until 1948, with some years spent fighting in World War II. The Post didn’t want to send a photographer out with him on assignment, so he took a borrowed big speed graphic camera, film and flashbulbs with him in order to capture images of jazz musicians. Since he had bought the film and flashbulbs, the photos belonged to him rather than the Washington Post. Gottlieb went on for a further career at McGraw-Hill but after that, he published his photos in a book, exhibited worldwide, including the Pensacola Museum of Art. Ultimately, he sold all his images to U.S. National Archives, so now the famous photos belong to all U.S. citizens.

Vickers and Gottlieb became good friends and would see each other at meetings of the American Federation of Jazz Societies. Vickers learned a lot about photography, while Gottlieb learned a little bit about the tricks of the trade of taking endoscopic photos inside the digestive tract.

All throughout Vickers’ home in Pensacola are beautiful photos of fantastic musicians gifted to him from various people, such as Duke Ellington, gifted to him by jazz photographer, Duncan Schiedt, who also exhibited his photos at the Pensacola Museum of Art. A photo of Ella Fitzgerald with Dizzy Gillespie and Ray Brown was a gift from Gottlieb.

Also hanging on Vickers’ office wall is a photo Norman took of Dick Hyman, who wore thick glasses, playing the piano. Vickers’ was fascinated by the way he could see the piano keys reflected in Dick’s glasses, so he took picture after picture to get the perfect one, and the final result hangs proudly on his office wall.

A bigger space that also has beautiful Jazz art on display is the Jazz Room in the downtown West Florida Public Library. The Jazz Society and the Library have always been friends, so when there was interest in having a space dedicated to jazz, it was a wonderful opportunity.

“I got two record producers, George Buck from New Orleans and Gus Statiras from New York City, who told me what they needed for the library’s jazz collection,” Vickers said.

In 2013, the Jazz Room was completely finished, filled with books, CDs, records, and artwork donated to the Pensacola Library for the Jazz room. The current value of all the items within the room is approximately $20,000, not to mention the fact that the WFPL Jazz room is one of only two libraries in America with a room focused solely on Jazz.