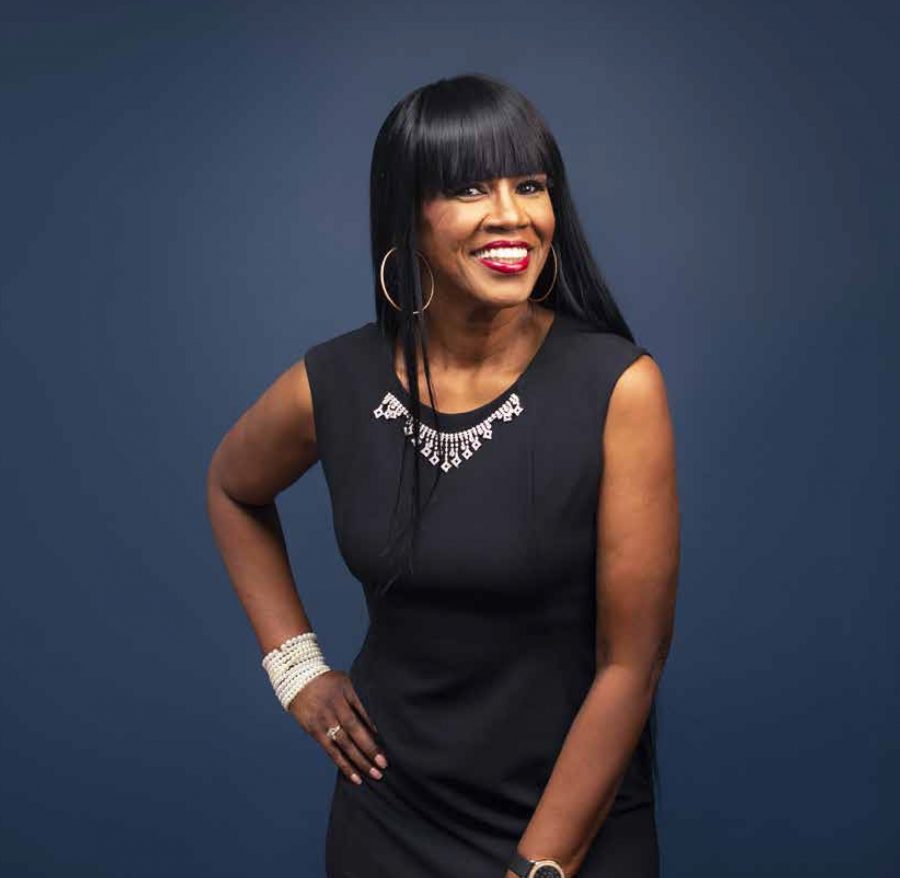 While Linda Moorer may be her given name, locals know her by her nickname, Sonshine—a nickname that accurately describes her personality, her approach to life and her spirit of generosity. Sonshine earned her nickname by focusing and working hard in the community to make a positive difference by inspiring and serving those in need.

Growing up the sixth child of eight siblings outside of Montgomery, Alabama, gave Sonshine a unique perspective on life. Her mother, an educator, and her father, a farmer, instilled the qualities of hard work and appreciation into their eight children.

Always an outgoing child, Sonshine was involved in many clubs and organizations throughout her public school years. Inspired by her mother and older sister, she attended college at Alabama State University, earning a degree in business management. Later, she attended Southern Tech to earn a second degree in computer systems.

Sonshine’s radio career began at AM station WXVI in Montgomery in 1988. She later moved to WKXN in Greenville and eventually settled in Pensacola where she has worked at WRRX for more than 10 years.

Her tagline, “The Hardest Working Lady in Show Business,” isn’t just a tagline—it’s an accurate reflection of her work ethic and dedication. Sonshine has maintained the number one position in the market for several years and continues to grow her listenership by continuing her mission of being powerful and strong voice for the community.

Coming of Age had the pleasure of speaking with Linda “Sonshine” Moorer about her life, her career, her faith and more.

COA: I know you're from Alabama and I know you come from a large family. Can tell me a little bit about where you were born, where you grew up and what your family life was like?

LM: Well, I am from a large family of eight children. I am number six. I was born and raised in a little town outside of Montgomery, Alabama, in Lowndes County. We didn't have very much. We were raised poor, but we were raised with strong  values. My mother was an educator and my father was a farmer. The story I like to tell and that gave me such inspiration to look forward in my life is that my mother had eight children and after that she went to school to get her GED and went on to school. She was in the education field until 1999. She had always been a strong leader for us and she taught us that if there's anything that you want, you've got to work hard for it. That's a philosophy that I live by today. Growing up like that, I think that's why my work ethic is as strong as it is today

COA: What were you like as a little girl? Were you outgoing and talkative or were you shy?

LM: I was never shy. I’ll never forget—when I first started doing radio over 32 years ago, my mother said to me, "You finally got what fits you." That was a great thing right there. As a family with eight children, we didn't have a whole lot, so we had to make do. We had to share everything that we had. My parents didn't have the money to give us a lot of things, but what they gave us was strong values that would take us through our lifetime. They taught us how to be appreciative of the things we had.

COA: With your mom being an educator, were you a good student?

LM: Sometimes. I'll put it like this; I was in everything I could think of. I was captain of the cheerleading squad from junior high on through my senior year. I always loved doing things. I was the chaplain of my class for several years. I won two modern dance contests. I was always active.

COA: Tell me about your college life.

LM: My older sister was a push for us to follow. She was the one to open the door by going to college. She worked her way  through school. I worked my way through school as well. It was not easy. Again, I say in order to achieve anything, you have to work hard to get it. I got my first degree in Business Management and I went back in 1989 to get a second degree in Office Computer Programming. It was not easy at all, but you have to move with the times and that's something that we all had to do, so that's what I did. I went back to school to better myself. When computers and everything were taking over, I had to have that knowledge in order to be able to keep up. Those fields are still relevant today. Radio is always evolving.

COA: How did you get into radio?

LM: I was working at another place when I got into radio. The gentleman that used to buy the advertising for the company was not at work that day and when the radio salesperson came by–I'll never forget his name, it was Bernard. When he came by he said he had to have this, so I said let me pretend to do the commercial. Of course they had these little hand recorders and that's what I did. Several weeks later, I got a phone call from a gentleman by the name of Tom Burns and he said to me, "With a voice like that, why aren't you using it on radio?" He was the general manager of the radio station in Montgomery, Alabama. I said, "Why don't you put me on your payroll?" I went and talked to him and about two or three weeks later, there I was. I started off working part-time on the weekends, and after that, they offered me a full-time position middays. It's 32 years later now and I've been doing it ever since. You know, in radio your job never ends. Your job is not Monday through Friday. It's Monday through Sunday. But when you want to be successful at something, you don't mind giving all your time. You're going to do your best so that you can be a success. You know, radio was always said to be a man's job, but as you can see now there are plenty of successful women who are doing very well with it, but we had to work hard.

COA: What was your experience like coming up in radio as an African American woman in the 1980s and 1990s?

COA: What level of improvement have you seen from the 80s to now in terms of gender and race and how you've personally been treated in that industry?

LM: There has been quite a bit of change. I think now there are so many strong women out there. As a matter of fact, a woman owns the company I work for. It's easier for me now, but I still have to work hard to prove that I can do what I am doing.

COA: Have you seen a change in attitude toward you as you grow older? Is age a factor?

LM: I'm giving more as I have matured than I was when I was younger. With the experience and the knowledge that I have of the business, I give more. I have to speak loudly to be heard. But what I've also learned is that when you know that you're doing right, you speak loudly and you stand firm on it. That's what I do now. I speak loudly and I stand firm because I know what I'm talking about.

COA: Do you address issues of race, gender or aging on your program?

LM: I always inspire. I've always been positive with my show and I always try to tell my audience to know that they can do anything that they want, but you've got to work hard for it. Nobody's going to give you anything. So work hard and make sure you get your education. Once you do, stay focused and build the character that you need to take you to the next level. I'm always going to be a force that tells them they can do it because I did it and I know they can do it. I started out in the 80s and now there are many doors that are open that weren't open for me. I try to inspire them to continue to be positive and to go on and reach their goal. Don't give up.

COA: What types of guests do you typically have on your show?

LM: Everyone from John Legend to the mayor–I have a continuing conversation with the mayor on my show. I have local pastors on my show to make sure we keep the community inspired. TV host Dr. Ian Smith is a regular guest on my show. I keep the mayor on my show to keep my listeners politically knowing what is happening here in Pensacola. I have a lot of the city council members on my show to let the people know that these are the people you can talk to in order to get answers when you need them. I try to do a full circle. I'm so into health. Dr. Ian Smith is all about health, too. I try to inspire people not to look at their age–look at what you do. Age is only a number. You can do what you want to do if you take care of the only body that you have. I stress that strongly. I teach the community how to exercise and I teach the community how to eat because those are two components that work together to take care of the body. I often say it's 80 percent what you eat and 20 percent movement. Then your body will take you a long way–just like a car. If you continue to change the oil, it will last you a long time and take you where you want to go.

COA: How was it talking to John Legend?

COA: You're known for being very positive and inspirational. How do you keep that positivity, particularly with everything happening in the world right now?

LM: You see there’s a force, a supernatural power that I believe in strongly. I'm talking about my faith. I study the word of God so that I can continue to be that positive force and I can continue to speak the positivity that I do to the community. He is the source of my everything. I study his word so that I'll be able to deliver words that are going to be positive to help somebody else. If you know the truth, then you can tell somebody that there's a positive force that's beyond what you think that can take you to another level. That's what keeps me going–the power that I have learned through my life with my faith. Faith is the  substance  of things hoped for, and that's the thing that I don't see, but I believe in. Faith is something I can't see, but I believe in it because I know that's there's a supernatural power that's bigger than what we have here. That's what keeps me going.