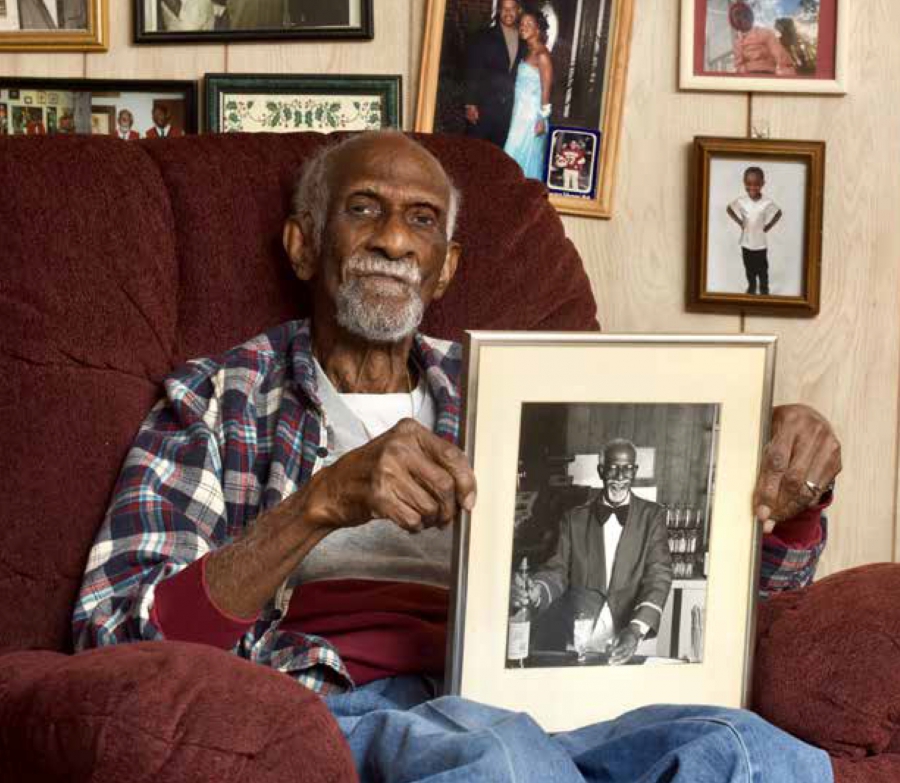 Every once in a while, if you are lucky, you come across a person who just makes you smile—whose story is so wonderful and whose life is so full that it renews your own faith in humanity. Often, these are the stories of everyday people and their everyday trials and tribulations, rather than the flashy tales of Hollywood films. That’s what makes them so special. Mr. Jesse Sangfield is one of those people. At 95, Sangfield’s smile is bright and his laughter is quick and contagious. As one might expect, Sangfield doesn’t remember every detail of his 95 years, but the details he does remember speak to a full and amazing life. His nearly nine decades in Pensacola also give him a unique perspective of the town he loves.

Born in Florala, Alabama, on August 1, 1924, Sangfield came to Pensacola with his mother when he was very young. She rented a room at 10th Avenue and Chase Street for about a dollar and a half a week.

“The Hawkshaw School was on 9th Avenue and I was a Hawkshaw boy,” said Sangfield. “My first job as a youngster was working at a fruit stand on Wright Street between Alcaniz and Haynes. I can’t remember the year. I’m showing my age.”

Although Sangfield remembers his time at the San Carlos fondly, he also acknowledges that times were tough.

“I was so young when I worked at the hotel, and I was trying to survive. I made one dollar per day, and I was paid every two weeks,” he said. “It was tough. I could lie in the bed and look at the moon just as pretty. The wind blew through the windows. We didn’t know what air conditioning was. We didn’t know what a gas heater was. It was rough. I remember when the second war started, life got better. I was able to help my mother. She was able to buy her house on Davis Highway. I was able to help her, and we lived a little better than we had been.”

During this time, Sangfield met his wife of 72 years, Dannie. “We met at Legion Field,” he said.

“There was some sporting event going on there. I was working in the San Carlos Hotel at the time. I didn’t know her, and she didn’t know me. I saw this pretty girl, and I had a roll of money in my pocket. I pulled out that roll of money, and I haven’t gotten rid of her since,” he said with a laugh.

The Sangfields were married at the downtown Pensacola courthouse in 1947.

“It’s been a good marriage. We’ve had our ups and downs, but we are still together. We have four girls and two boys and eight grandchildren and 11 great grandchildren.”

Eventually, one of the hotel managers left the San Carlos and went to work at the Mustin Beach Officers Club. He asked Sangfield to join him and he accepted.

Sangfield’s time at Mustin Beach was a whirlwind of activity.

“I met a lot of interesting people, but I can’t remember them all,” he said. “I’ve seen Senator McCain many, many times. He was always moving fast. Always on the go.” Sangfield began working at Mustin Beach sometime around 1950 and he left in 1957.

In 1964, Sangfield went to work at Scenic Hills Country Club, where he stayed until his retirement in 1989. He remembers the area around Scenic Hills being a lot different back then.

“When I was working at Scenic Hills, Davis Highway was two lanes and Nine Mile Road was two lanes,” he said. “It was all woods out there. It was frightening coming home at night at 1 or 2 in the morning.”

Still, he loved his 30 years at Scenic Hills, and he enjoyed meeting many notable and interesting people. Along with pictures of his beautiful family, Sangfield’s living room walls are covered in photos of him with the people he met throughout his career—everyone from local businessmen like Al Tarr and Dizzy Dee to national stars like Coach Jimmy Johnson, Hank Aaron, Arnold Palmer, Red Barber, Johnny Unitas and more.

“Al Tarr had a restaurant down by the ice house,” Sangfield remembers. “He was a member of Scenic Hills. He was really a sharp dresser. I use to love to see him because I wanted to dress like him.”

Sangfield is grateful for his long career and the fine people he met along the way.

“People in Pensacola have been real good to me and my family,” he said. “From the San Carlos to the Mustin Beach Officers Club to Scenic Hills Country Club, everybody has been so nice to me. They helped me raise my kids.”

Sangfield’s home, in which he and his family have lived for more than 60 years, sits just across the street from the site of the home he lived in with his mother.

“I wouldn’t want to live anywhere else,” he said. “That’s why I never went anywhere when I had a vacation. I like it here in Pensacola.”

He’s also grateful for his long life, his family and his many blessings.

“I’ve completely enjoyed life,” he said with a genuine smile. “I’m up in age, but I still enjoy life. I thank God every morning. When I sit down to eat my breakfast, I say my blessings that I can eat a good meal. I don’t want to tell you what I had for breakfast when I was young. It was tough. But it’s so good now. I can sit down and have a good breakfast and relax, and I don’t have to worry about nothing. My daughters take care of me. My sons are good, but I’ll take my daughters anytime (laughing). It’s been a good life. I’ve enjoyed every bit of it. In the beginning, it was tough, but as time went along and I got to meet people working at different places, it got better. One thing I did—I kept my nose clean. I didn’t go to jail for nothing. I stayed out of trouble. That’s what I tell my children—stay out of trouble. Stay with good company. If you do that, you won’t have any problems. And so far, they haven’t had any problems. Of course, at this age, if they get into problems, they are on their own (laughs).