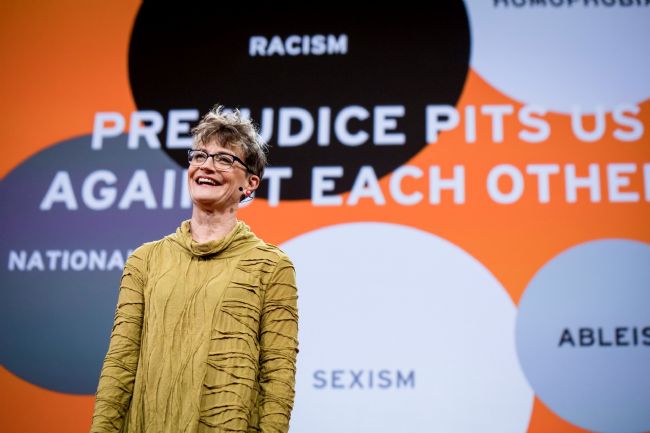 Ashton Applewhite is a writer and activist who has spoken out against ageism and the culture that fosters it. Her book, This Chair Rocks: A Manifesto Against Ageism, and TED Talk earned national acclaim for her argument that implicit and explicit prejudice on the basis of age is the least visible and last socially acceptable -ism. Discrimination, self-doubt, and industries built around the idea of hiding the physical effects of aging are the real problems, Applewhite argues, not the aging process. As she says, aging is living and living is aging. She talked with Coming of Age about what ageism means for society and the individual, and what we can all do to combat it.

You talk about how ageism is the last remaining socially acceptable form of prejudice. In what ways are older individuals discriminated against?

Let me first say that because we all age, ageism affects younger people, too. But because we live in a youth-obsessed society, it affects older people more, I would say age discrimination is most evident in the workforce, where it is rampant. It is often the first form of discrimination that older white men encounter. AARP recently released a study that two out of every three older job seekers report age discrimination of some sort. That is an alarming statistic. Women experience a double whammy because ageism and sexism intersect. This hits them hard because they are not only judged by age but also by appearance. There is this presupposition that if you look your age, somehow you are less valuable and less attractive.

There is a form of ageism that I think we are all hostage to, which is internalized ageism. Most of it is unconscious. One of my favorite responses to my book is, "I didn't realize how ageist I was! And how it affects my view of myself." But that's okay, because we can't challenge bias until we're aware of it. We're all ageist and we all need to do better. No judgement here.

Seventy- and eighty-year-olds have had an entire lifetime of being surrounded by negative messages about age and aging: that old people are incompetent, or ugly, or less interesting or valuable than young people. If we never challenge these stereotypes, it's easy for them to become self-fulfilling prophecies. For example, as we get older we tend to blame every ache and pain on our age. And you know, maybe that ache is arthritis, but it could also be because you cooked dinner for 10 people, or moved some heavy boxes. We have to move beyond every bad thing being a function of aging.

How should our elders reengineer their minds to take pride in their aging bodies?

Well, we should set ourselves an easier goal, first off. It's a long journey from fear and denial of aging to being proud of getting older. I remember hearing about the disability movement years ago, how they were taking steps to combat ableism, and I thought it was just fantastic that they were celebrating disability as a valuable and critical part of their identities in a culture that prizes physical perfection. Disability pride! Some time later, it dawned on me that age-pride should also become a rallying cry.

So first, try to dig yourself out of denial. Accept it: we are all aging. America's hyper-capitalistic society wants us to think that every problem can be solved by buying stuff. That's what fuels the market for things like wrinkle creams and "brain games," paired with the denial-based desire to "stop the clock" at middle age. Think about how you think about aging, and why - and who benefits when aging is framed as a problem or a disease. We're all going to age, no matter how much we try to intervene with measures like hormones or surgery. And that's okay. Ask yourself if you'd rather be young all over again, if it meant you couldn't bring your memories with you and you couldn't know what you know now. Everyone says no. Even the most terrified among us has to acknowledge that we are a product of all our experiences so far, and that aging enriches us. Look, I'm not a Pollyanna about aging. There are many real challenges. But we need to be conscious of the benefits. How do you feel about being your age? What are the benefits? Would you go back? We know that there are good and bad aspects to every stage of life.

How can we help make aging more joyous experience for our older friends and family members?

All social change starts in each of us, whether you're 12 or 112. One very practical step is to make and keep friends of all ages. Age segregation is a tremendous problem. Very few Americans have close friends more than 10 years older or younger than they are - which isn't even half a generation! The most important thing you can do is to deliberately age- integrate your social circles, especially older people because our social circles tend to shrink over time. Find a younger or older person who shares your neighborhood or your hobby or is a fan of the same sports team. It'll enrich you both, enlarge both of your worlds, and reduce age discrimination in the process.

How should seniors react to explicit or implicit aging discrimination in the workplace or in other aspects of life?

Nothing changes unless we call discrimination out when we encounter it. That can be difficult if you're worried you'll lose your job if you bring it up, I get that, but age discrimination is illegal. Look at what's happening with the #MeToo movement right now. A few brave women spoke out and eventually, more and more came forward and said, "Sexual harassment has happened to me forever, it's been happening forever, and it has to stop." It became obvious that these cases of assault and discrimination weren't isolated events that women were somehow to blame for, but the result of entrenched systems of sexism and structural discrimination.

Every time someone speaks out, it gives courage to someone else. It has to start somewhere, and as awareness builds, eventually a broad social movement emerges. Change the culture. The laws will follow.

Have you seen any communities or countries that really embrace the natural aging process?

There are religious traditions around the world for which ancestor-worship is a foundation. They embrace the transient, circular nature of life and the inevitable transitions of living and dying. In India, for example, over 80 percent of people over 65 live with their families. It is just assumed that people will care for family members from birth to death, so there's no stigma around needing help, even around toileting. Imagine that! These transitions are natural and the obligations are shared and communal. But where you have consumer-driven societies where the value of an individual is tied to their conventional economic productivity, it's hard to admit that you need help or seen as shameful to depend on your family.

What do you most enjoy about aging?

I feel like I know myself better. A lot of women describe aging as liberating. You're less worried about how you appear or whether you're conforming with how you "ought" to be and you're more in tune with who you want to be. Dozens of reputable studies from the US and around the world have established that people are happiest at the beginnings and the ends of their lives. It's called the "U-curve of Happiness." Imagine what that curve would look like if we lived in a less ageist world, and were less brainwashed by fears that are way out of proportion to the reality. Whether or not you care about ageism, all kinds of prejudice are ascendant now. Whatever the cause that's most important to you - whether improving education or going to Mars - make sure your team is made up of both young and old - in addition to diverse colors and genders. That's not politics, that's tactics, because it will make your team more effective. And no matter what your goals happen to be, you can dismantle ageism organically by working with people of all ages to achieve them.